Health Risk of Weed Use

The use of weed can place quite a few serious health risks. The negative effects include both physical and mental and can affect people of different ages differently.

May occur for first-time weed users related to physical and mental health mainly arise as a result of repeated use over several months or years. Certain factors can increase or reduce a weed user’s risk of being negatively affected: A personal or family history of mental health issues such as psychosis and bipolar disorder Frequency of use: Regular use (once every week or more) is usually linked to increased risk of health problems. Example of the circumstances of use: When weed is combined with other substances such as alcohol or medications.

Smoking weed appears to be risky than other methods of use, although poisoning from foods containing weed is common among inexperienced users. It is possible that the problem: Was already present prior to weed use Is a result of weed use Is influenced by weed use or, conversely, influences weed use Based on supported these factors, it's difficult to predict whether or not a person will experience significant problems after using weed. Most experts agree that weed use is never 100% safe. Risks to cognitive abilities: Judgement Attention span Memory The ability to make decisions. Depression Individuals who regularly use weed may show a lack of interest in activities other than using weed (studies, work, leisure, etc.). They may also experience symptoms of depression, for example: 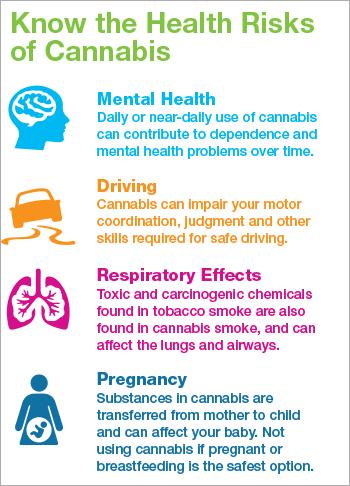